Fourth grade students at St. Finn Barr Catholic School trudged out in the pouring rain to learn what life was like for the Coastal Miwok Native Americans in California.  Kule Loklo, which means Bear Valley in Miwok, is part of the Golden Gate National Park system in Marin.  The local Miwok people have re-created a typical Miwok village from hundreds of years ago so visitors can get a sense of what life was like for the local native people.

Students dodged puddles and took in the beautiful scenery as they hiked up quietly to the village.  The knowledgeable park ranger led them on a tour of a kotcha, sweathouse, and roundhouse.  He described how the Miwok used natural resources in their daily lives, such as bay leaves to keep critters out of their acorns, using a deer bone to scrape away the scent off their bodies before hunting, redwood bark planks for building structures, and tule reeds as rope.

Students were taught that Miwok people do indeed exist today but live in houses just like them.  Nevertheless, they do use the village for special celebrations and pow-wows. The highlight of the day was a tour to the roundhouse, which is a place for celebrations and spiritual worship.  Students had to hold up their left hand and turn to the right to ward of evil spirits and could only walk clockwise inside.  Students left with a greater connection to Native Americans and a sense of empathy for their plight during Spanish colonization. 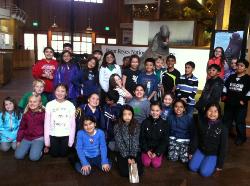 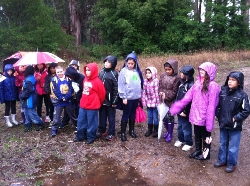 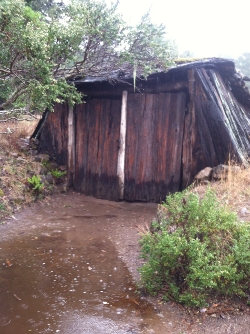