Olympian Daughter of Science Director Christine Bertko Moves on to the Semifinals in Rio! 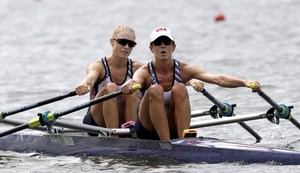 Congratulations to Kate Bertko and her Lightweight Women's Sculls Rowing Partner Devery Karz. The pair bounced back from a tough opening heat to earn a spot in the semifinals, where they will take on five teams, including event favorites the Netherlands and medal contenders Ireland and Canada for a berth in Friday’s medal final.

In need of a top-two finish to keep their Olympic medal hopes above water, Kate Berkto and Devery Karz entered Tuesday’s race with high hopes, that were nearly spoiled when they “caught a crab,” – that’s rowing slang for the blade of an oar getting caught up in the water, causing a serious lapse in timing and putting the overall race in jeopardy. The oar did go parallel with the boat, but before it could slow down Karz and Bertko, quickly recovered before the blade fell into the water.

"Sometimes it gets a little bouncy," she said. "Everybody makes a technical mistake, so we just moved through it like nothing happened. We didn't focus on that stroke, but we focused on the next stroke and stayed calm and kept moving."

It was a potentially medal-saving move. Karz and Bertko quickly recovered from potential catastrophe and went to win the first lightweight women's double sculls repechage to advance to the A/B semis Wednesday at 6 a.m. MDT.

The victory (7:58.90) on the 2,000-meter Olympic course guarantees the American crew a top-12 finish in Rio and puts them back in the chase after finishing third in their Olympic debut Monday.

The slow start was quickly overcome. The U.S. zipped into second place two minutes into the race while trailing Japan. At the four-minute mark, Karz and Bertko made their move. By four minutes and 30 seconds, they passed the Japanese team, and didn't relent. At the six-minute checkpoint, Karz and Bertko maintained their lead. The Japanese duo (8:00.50) made a late charge, but the Americans held them off.

"We're a crew, so we do everything together," Bertko said. "We communicate, we respond, we have a strategy for dealing with this adventure, and just snaps right in.