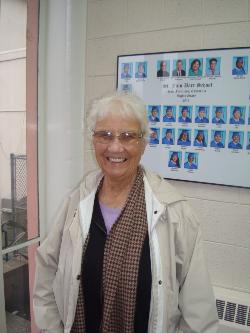 Sister Sally Thompson, SNJM, Sister Sally Thompson (Sister Mary Anselma) was welcomed into the loving arms of God the afternoon of June 2, 2014 surrounded by family members and her sisters in community. Sister Sally was 88 years old and had celebrated 69 years as a vowed member of the Sisters of the Holy Names of Jesus and Mary. While residing just blocks from St. Finn Barr campus, she volunteered daily with students.

She was a sub-mistress of novices, (sisters in formation) for several years; loving those in formation and calling forth the best in each one of them.

She was a treasured member of the large and loving Thompson family. Her love of Marin County was deeply rooted and clearly evident with her frequent trips there to visit family. Sister Sally was raised in San Anselmo and attended Saint Anselm School.

Sister Sally's rapid fire wit, her broad and disarming smile and her joy in life endeared her to many. Her goodness was shown by the statement made so many:'I never heard Sister Sally say an unkind word about anyone.'

Gifts in Sister's memory may be made to the Ministry Fund, Sisters of the Holy Names, P.O. Box 907, Los Gatos, CA 95031 or on-line at www.snjmca.org.
- See more at: http://www.legacy.com/obituaries/sfgate/obituary.aspx?n=sally-thompson-sister-mary-anselma&pid=171263919&fhid=2112#sthash.sAkdp6L9.dpuf
http://www.legacy.com/obituaries/sfgate/obituary.aspx?n=sally-thompson-sister-mary-anselma&pid=171263919&fhid=2112