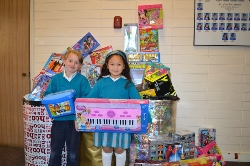 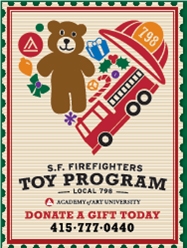 The St. Finn Barr Catholic School is so proud of our students and their families sharing their many gifts and talents with others this Christmas season.

To learn more about both of these local giving programs, refer to the attached links:

The San Francisco Firefighters Toy Program believes that no child should be without a toy during the holiday season. In time of loss due to fire, our firefighters are the ones who see first-hand, the devastation when a child is left without a favorite toy. The Toy Program is the cities largest and the nation’s oldest program of its kind. Since 1949, it has evolved from a few firefighters repairing broken toys and bikes for 15 families to, in 2011, 300 firefighters and friends volunteering their time to distribute over 200,000 toys to more than 40,000 disadvantaged children. Besides helping individual families in need, the Toy Program serves many community organizations, including shelters for abused women and children, inner-city schools, children’s cancer wards, and pediatric AIDS units. They also respond on a year round basis to displaced children who become victims of fires, floods and other such disasters.