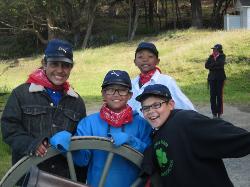 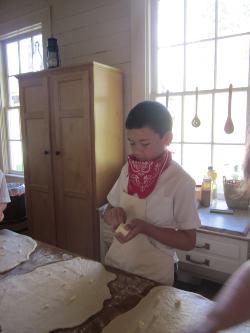 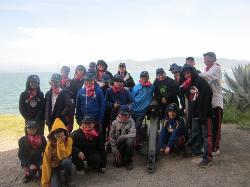 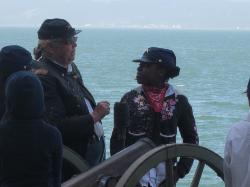 In the Spring of every year, the 5th grade class ventures to Camp Reynolds on Angel Island for the “Living History” Program. The purpose of the trip is develop the students' understanding of what life was like during the Civil War by reenacting camp life for soldiers during that period.

Camp Reynolds was established on the island in 1863 by the Federal Government in response to fears of a Confederate attack on naval installations at Mare Island and the Benicia Arsenal. Artillery batteries were built near the camp at Point Blunt, Point Knox, Point Stuart and a water battery at the Camp Reynolds Wharf.

More on the trip from the Living History website:

When the class arrives at the island, all participants become soldiers in the U.S. Army in the year 1864. They march to Camp Reynolds carrying their personal gear on their backs.

Bunks are then assigned in the Quartermaster building for the night. During the day these new recruits receive training in militia drill, compass orienteering, mess cooking, bread baking, and flag signaling. In the evening a reconnaissance hike is made to Mount Livermore. Later that night, each squad is assigned a security watch period and must maintain a journal of their experiences. The next morning, park staff returns and utilizes a group of “soldiers” to help fire a twelve-pound, mountain howitzer cannon. (http://angelisland.org/history/angel-island-state-park-living-history-program/).

Student insights from the Spring 2013 trip:

I remember signing songs and how proud we were when we made it up Mount Livermore, telling scary stories, and having fun together. Best of all was {being able} to spend time with my friends – Jacuelyn

I have never been on a boat before and I thought the ferry was AWESOME! – Gabriela

I got to go on a compass hike. The bake house was where I made butter. Marching drills were when we used the “muskets.” I liked to yell “Hit the deck!” And the night hike was scary but we saw beautiful views. I loved the flag signaling and mail call. The best parts were eating and sleeping! – Christian